Sutton Foster in Anything Goes is coming to US movie theaters this March!

The London revival of Anything Goes filmed several performances at the Barbican Theatre earlier this year.

Here's all we know about the Anything Goes US cinema screening:

The London revival will be screened in US cinemas March 27th & 30th with additional dates to be scheduled soon. Tickets are expected to go on sale later this month.

The recorded performance runs 155 minutes and will combine footage from three performances recorded live at the Barbican Centre.

The same recording was screened earlier this year in UK cinemas. You can watch the official trailer here. The filmed production is also set to be broadcast on BBC Two this Boxing Day in the UK.

Foster, who won her second Tony for her work as Reno Sweeney in the 2011 Broadway revival of Anything Goes, stepped into the role created by the late Ethel Merman this summer at London’s Barbican Theatre and received rave reviews.

Anything Goes Producer Howard Panter, who is also the Creative Director of Trafalgar Entertainment, filmed "The King and I" starring another Broadway star, Kelli O'Hara, in 2018.

"Anything Goes" will follow the same path of "The King and I" that was filmed for worldwide distribution through Trafalgar Releasing and other partner distribution channels, such as BroadwayHD.

Filmed West End musicals previously distributed by Trafalgar Entertainment include The King and I, An American in Paris, 42nd Street, and Kinky Boots. Browse all filmed Broadway and West End shows, here. 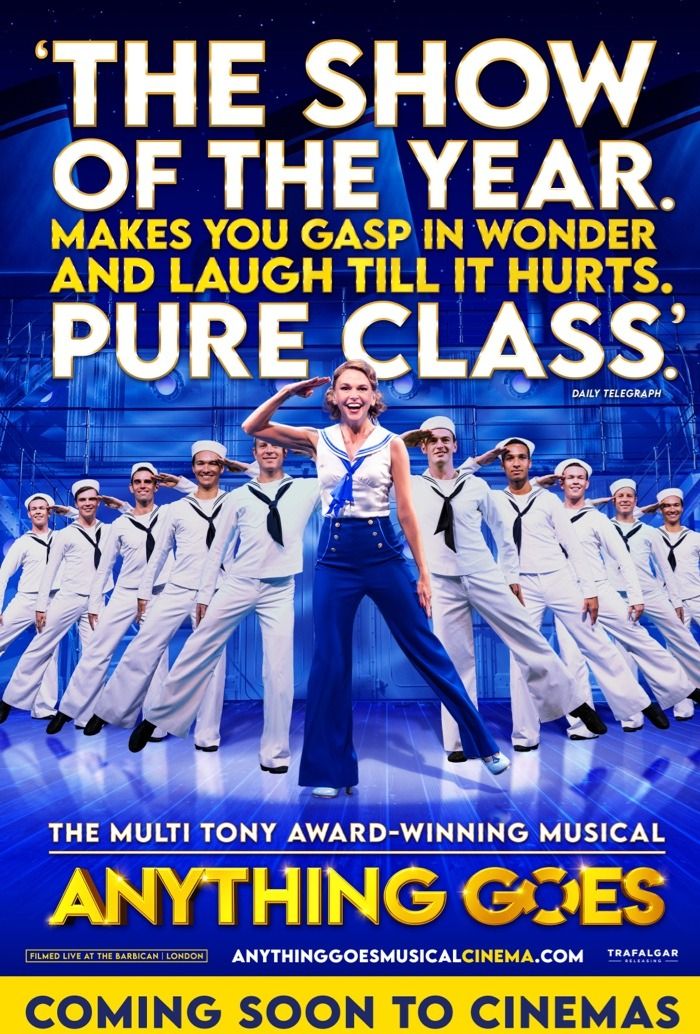 Producer Howard Panter said: “The multi-Tony Award winning glorious production of Anything Goes, directed by Kathleen Marshall, is not to be missed. London audiences already cannot get enough of this energetic and uplifting classic musical which has been sold out night after night.

“From four outstanding leading actors – Sutton, Robert, Felicity, Gary – to the spectacular supporting company, the glorious set design, the breathtaking choreography and of course the wonderful score. It really is ‘the show of the year’ that everyone should experience and I am delighted that via this two day cinema release the show will get an even wider audience across the UK.”

Trafalgar Releasing’s CEO Marc Allenby added: “We’re delighted to be working with our partners within the Trafalgar Entertainment Group to bring this entertaining and uplifting five star musical to cinemas across the UK.

“Musical theatre has a proven track record of box office success on the big screen, and with its all-star cast, spectacular dance routines and instantly recognizable songs, Anything Goes is the perfect production to bring laughter and joy to cinema audiences.”

Cole Porter and PG Wodehouse's classic musical is set on the SS Americana and follows two pairings that try to find love on the high seas. It features numbers such as "I Get A Kick Out of You", "You're the Top", "It's De- Lovely!" and "Anything Goes".

Browse all Broadway and West End musicals that are now streaming online!